THE GO FOR BROKE BATTALION

“Go For Broke” is a slang frequently used in Hawaii which means to put it all on the line, risk everything to win big.  Whether you see it on a t-shirt, mug, or any other local merchandise, it has its roots in Hawaii’s history.

This was the motto of the 442nd/100th battalion who fought not only to protect this country in WWII but fought to change the racial prejudice within American society.  It was and still is the motto for the 442nd Regimental Combat Team, an Army unit comprised mostly of Japanese American men recruited during the war effort from Hawaii and the continental United States. There has never been a more decorated unit in the Army and that Army has very significant ties to this community.

The Japanese referred to them as Nisei, second-generation Japanese Americans.  Many of whom were born on U.S. soil to immigrant parents.  But choosing to fight for this country was not without sacrifice.  Many of them had family in Japan and the choice created a heavy burden for them to carry.

After the attack on Pearl Harbor, the Nisei jumped in to help wherever they could be useful.  At that time, 40% of Hawaii’s population was of Japanese ancestry.  Like many of the young men on Oahu, they aided the wounded, sorted through the rubble, gave blood, and buried the dead.  Records show that the Hawaii Territorial Guard, a Nisei unit of cadets in the University of Hawaii’s Reverse Officers’ Training Corps (ROTC), stood watch over Iolani Palace, Hawaii’s government center, as well as utility installations in an effort to assist with the aftermath.

On January 19, 1942, the Hawaii Territorial Guard was disbanded by the Army and reenacted the next day without Nisei cadets.  Soon after, all Japanese American men were designated “enemy aliens,” and as such could not enlist in the armed forces.

As one would expect, they were saddened and disappointed by the racism that prevailed.  Through the encouragement of community leaders, they were told to petition the military governor and ask that they be allowed to support the war effort in whatever capacity the U.S. saw fit.  Below is an excerpt from their official request to the territorial governor. 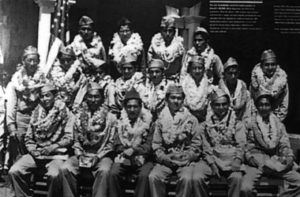 “We, the undersigned, were members of the Hawaiʻi Territorial Guard until its recent inactivation. We joined the Guard voluntarily with the hope that this was one way to serve our country in her time of need. Needless to say, we were deeply disappointed when we were told that our services in the Guard were no longer needed. Hawaiʻi is our home; the United States, our country. We know but one loyalty and that is to the Stars and Stripes. We wish to do our part as loyal Americans in every way possible and we hereby offer ourselves for whatever service you may see fit to use us.”

The military governor accepted their request and assigned them to the Army Corps of Engineers where they were assigned to build barracks, dig ditches, quarried rock and surfaced roads.  They were referred to as The Varsity Victory Volunteers or Triple V.

However, their efforts didn’t go unnoticed, and in Jan 1943, the War Department announced that it was looking for Nisei volunteers (approximately 1500) to form an all-Nisei combat team.  Not only did the War Department get their 1500 volunteers, but over 10,000 Nisei men (from Hawaii) raised their hand and enlisted to help their country win the war. Many of whom were from the Triple V.

On the mainland, the War Department targeted 3,000 recruits but only enlisted 1,182 Nisei.  It’s been speculated that many felt that the treatment faced by the mainland Nisei was drastically different and impacted the War Departments efforts.  Conditions in the camps were rough at best and treatment in the community before encampment didn’t help to make the Nisei feel wanted.

Because of the intense scrutiny and mistreatment mainland Nisei experience, they were very guarded.  And although, both the Hawaii Nisei and Mainland Nisei were culturally tied, there was difficulty getting them both to work together.  It wasn’t until the Hawaii Nisei visited a concentration camp in Arkansas that they began to understand why the Mainland Nisei were so guarded.  Eventually they put away their mistrust of each other and began to form a cohesive tight unit.  As a result, the 442nd/100th battalion earned 9, 486 Purple Hearts, one Medal of Honor, 51 Distinguished Services Crosses and 560 Silver Stars – plus 28 Oak Leaf Clusters indicating a second award. The unit also earned seven Presidential Unit Citations,

No other unit in the U.S. Army to this day has approached the number of combat decorations of the 442nd RCT and 100th Infantry Battalion. Their unit motto, “Go for Broke,” said it all…Put it all on the line….risk everything….to win big.  The Nisei felt they had something to prove, but more importantly they never wanted to bring shame to their family, and as a result, they demonstrated their patriotism time and time again.

So did they Go For Broke?

Given the number of casualties sustained by them in WWII they put it all on the line.  They risked everything.  So many of them never made it home.

But did they win big?

I would have to say a resounding YES!!  Not only were they the most decorated and a key factor in winning WWII, but more importantly, they helped Americans to understand diversity.  They helped us to understand that no matter your ancestry, the color of your skin, your faith, as Americans, we have a common love.  A love for this country and the liberties our immigrant ancestors dreamed of having.  They helped us to understand what sacrifice is really about in a country filled with immigrants.  What it meant to be Nisei – second generation Japanese, first generation, Americans.

Become a supporter today of the U.S. Army Museum of Hawaii, by purchasing a souvenir Ha-Go Shirt. All donations support the maintenance and upkeep of the our artifacts and exhibits.

We look forward to seeing you soon!