Every five years at Punchbowl Cemetery, in Honolulu, HI, the Ernie Pyle Legacy Foundation hosts a eulogy reading in memory of the Pullitzer Prize winning journalist, Ernie Pyle.  75 years after his death his contribution to the war effort still resonates not only with veterans and historians but those who appreciate patriotism. 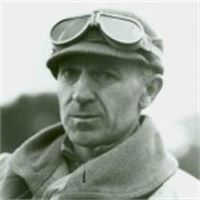 Who was Ernie Pyle?

Ernest “Ernie” Taylor Pyle born on August 3rd, 1900 on a farm in Dana, Indiana, an only child, to William and Maria Pyle, tenant farmers.  He was an award winning, American journalist/war correspondent known for his simple straightforward style in depicting ordinary people.  At a time when the world was in total chaos, Ernie set out to tell the story of war from the soldier’s perspective.  He helped Americans understand the hardships and cruelties of war.  He helped the world to understand what brotherhood meant to a serviceman.

As a young man, he enrolled in college at Indiana University in hopes of attaining a journalism degree, but soon learned that the degree wasn’t offered and declared himself an Economics major.  In spite of that, he continued to follow his passion for writing and participated in the student newspaper and the campus yearbook to develop his skills.

His junior year he traveled with some of his fraternity brothers to follow the Indiana University baseball team on a trip to Japan.  Inclusive on the trip were stops in Shanghai, Hong Kong, and Manila.  This was most likely the inspiration that fueled his desire to travel and explore the world in later years.

With only a semester remaining at Indiana University, Pyle left school to pursue a career as a newspaper reporter for the La Porte Herald in LaPorte, Indiana.  After three months at the Herald, was asked to the join the staff of The Washington Daily News in Washington D.C.

In the fall of 1923, he met his wife Geraldine Elizabeth “Jerry” Siebolds and they married two years later.  They frequently traveled together on his assignments and in 1940 they purchased a modest home in Albuquerque, NM.  The residents became their permanent home base for the rest of their lives.

In 1927, Ernie went to work for the Daily News in Washington D.C., it was there that he began work on his aviation column.  Although he was never an aircraft pilot, he gathered much of his content from hundreds of miles as a passenger.  His column was syndicated via the Scripps-Howard newspapers and was considered one of the first and the best known aviation column of its time.

He then wrote a series of articles about a trip he took to the west coast needed to recuperate from case of the flu.  The articles showcased his trip and the people he met along the way.  It crafted and honed his style and helped to gain him increased recognition.  Eventually, he quit the Daily News and started his own nationally syndicated column.  The column focused was on his travels throughout the U.S., Canada, Mexico, Central and South America.  Again it appeared in the Scripps-Howard papers six days a week and earned him national recognition.

His next adventure laid within the constructs of WWII.  Pyle initially traveled to London (1940) and began writing about the Battle of Britain.  He witnessed fire bombings and the growing conflict within Europe.  His relaxed and simplistic style of writing captured perspectives of the common solider as well as how the war affected the men.  His description of or reactions to an event in simple, informal, layman’s terms helped to gain him popularity amongst his readers.

In addition to his relaxed style, he often took up causes to highlight some of the hardships faced by fighting soldiers.  In a column that he wrote from Italy in 1944, he proposed that soldiers should get “combat pay” just as airmen received “flight pay.”  As a result, Congress passed a law that authorized 50% extra pay for combat service.  The bill was named the Ernie Pyle bill.

He covered a number of European campaigns but eventually came home due to combat stress.

He was then asked to cover the Asian-Pacific Encounter and reluctantly agreed.  His column was so popular that he was the only civilian correspondent to ever be regularly published in the Stars and Stripes (U.S. armed forces newspaper).  It was said that he was so popular that soldiers would prefer to appear in a Pyle article then to receive a medal.  He was and still is “the pre-eminent war correspondent of his era” and is still recognized as “the standard to which every other war correspondent should strive to emulate.” 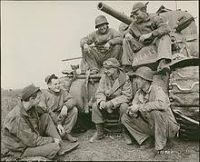 At the time of his death (April 1945), Pyle was on the island Le Shima covering the invasion of Okinawa.  Pyle was buried wearing his helmet, between an infantry private and a combat engineer.   As a tribute, the 77th Infantry Division of the U.S Army erected a monument at the site of his death.  The inscription on the monument reads: “At this spot the 77th Infantry Division lost a buddy, Ernie Pyle, 18 April 1945.” Echoing the sentiment of the men serving in the Pacific theater, General Eisenhower said: “The GIs in Europe––and that means all of us––have lost one of our best and most understanding friends.”   And President Truman said, “No man in this war has so well told the story of the American fighting man as American fighting men wanted it told. He deserves the gratitude of all his countrymen.”

After the war, Pyle’s remains were moved to a U.S. military cemetery on Okinawa and eventually relocated in 1949 to the National Memorial Cemetery of the Pacific in Honolulu, Hawaii.

The Ernie Pyle Legacy Foundation was established for the purpose of actively upholding and fostering ongoing recognition of the distinct contributions of war correspondent Ernie Pyle to the military, the families of soldiers who were touched by his reporting and professional journalists.  The foundation will endeavor to create public awareness of the journalistic accomplishments of Ernie Pyle among generations of Americans who did not benefit from his reporting during that period of global conflict and to provide opportunities for an ongoing dialogue among working journalists, students and the public at large.

While this year’s event is shrouded in the COVID19 Pandemic, a wreath will be laid on his gravesite once again remembering his contribution and patriotism.  And although his eulogy will not be revisited, a 75/76th Anniversary celebration next April 2021 hosted by the Ernie Pyle Legacy Foundation will once again highlight his sacrifice and he will not be forgotten.  And, maybe the greatest tribute we can hope for moving forward, is that journalists cover this invisible enemy and other issues, with the honesty, simplicity and straightforwardness that Ernie would have.  To that end, we owe him a tremendous debt of gratitude.

Become a supporter today of the U.S. Army Museum of Hawaii, by purchasing a souvenir Ha-Go Shirt. All donations support the maintenance and upkeep of the our artifacts and exhibits.

We look forward to seeing you soon!